“If you don’t live in Sydney, you camp.” “No, someone falsely attributed those words to me. I love Melbourne the garden city of Australia”. Former Prime Minister Paul Keating, Radio 3AW, October 5, 1995.

The election is launched. Unfortunately, it will be presidential and not political. The putative presidents come from opposite sides of the tracks in Sydney, and this fact might be useful for us to examine a key political difference: “houses for all‘ or ‘housing as property‘.

There is much to learn from the homes of leaders; moreover, it is what happened to these houses after they left that gives an idea of ​​the state of progress of our housing policies in Australia.

Scott ‘Scomo’ Morrison poses as the suburban daggy dad of The (Sutherland) Shire; others see him as the “Liar of the Shire”. Either way, he’s do not a boy from Shire – he grew up in the (now more salubrious) Bronte. Go to rugby, not the Sharkies.

The modest Federation house on a large block in which he first lived belonged to his aunt, shared with his parents and older brother Alan, in what we would now call a multi-generational occupation. Facing east and north around a corner, it had an enclosed veranda but was still open enough to provide ‘eyes to the street’ and a large rear garden for play. 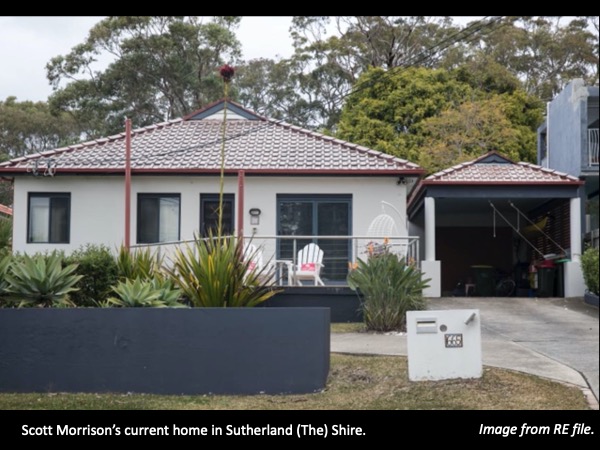 Scomo and Jenny bought their first home in Bronte, but to get over it moved to the Shire, swapping football loyalties, teams and suburbs. Scomo’s house seems fairly unremarkable in a suburb where many are unabashedly garish. Think Sylvania Waters, channel-based, some would say carnal, development. PNL heart of real estate investment. 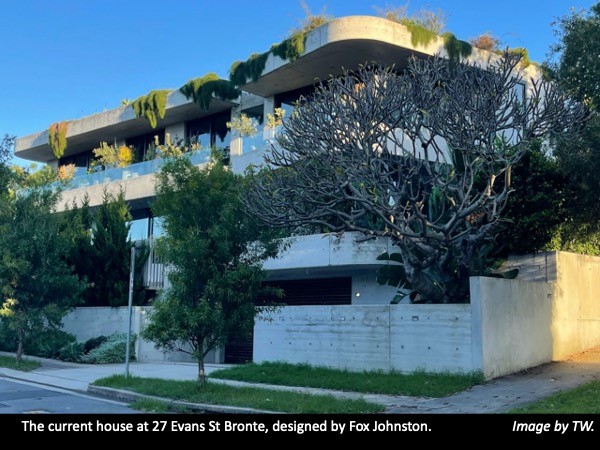 What he left in Bronte tells us even more about the current sad state of housing. The family home was sold and refitted in 2015 into an extremely oversized home that looks like a ‘residential apartment building’ (RFB) but is actually a detached house for fewer people than the one who lived in the original house on the site. The house has no connection to Scomo (other than the site) but speaks to PNL’s belief in the house as “property”, and therefore as wealth. 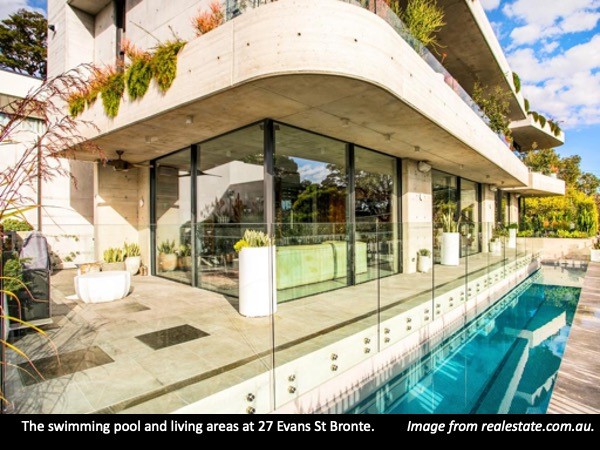 Eschewing neighbors, the vanity statement is a realtor’s wet dream: “two living rooms, four bedrooms, five bathrooms, three cars, with a pool.” The perfect personification of the idea that “if you try, you’ll get there”, or perhaps Scomo’s more recent advice that “the way to avoid paying rent is to buy a house”. 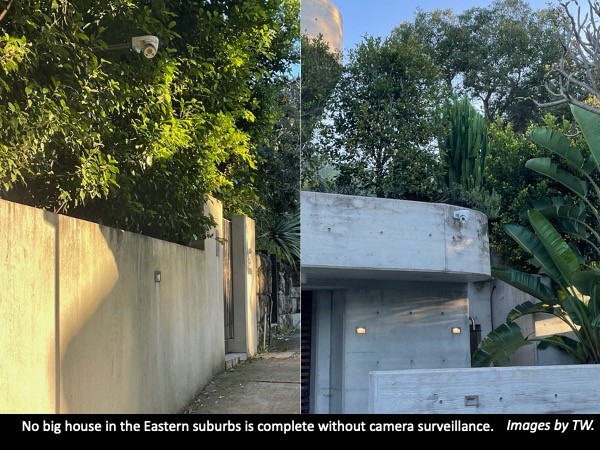 Like so many recent designs, the house is a grotesque mutilation of traditional suburban design values. Gone are the modest houses and landscaped settings, replaced by heavy plantings to compensate for the hard concrete and the loss of privacy due to the over-glazing. The irony is that the house is changing from an open and active part of the place to an aggressive defense requiring surveillance cameras. 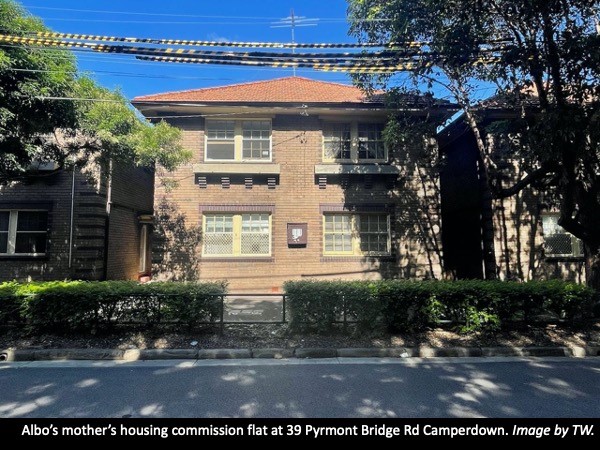 Anthony Albanese often recounts his childhood story to the housing commission in inner-city Sydney; a hackneyed story he uses to flesh out who he is, describing where he comes from: a modest home his single mother lived in all her life, as he did for the first 26 years. 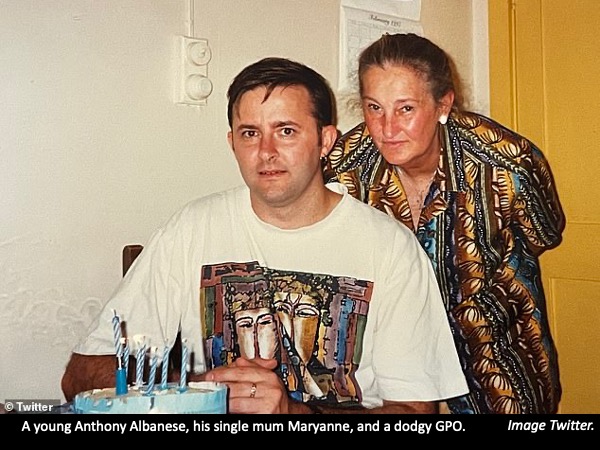 The two-storey houses are modest and well-built, part of a huge expansion of “council housing” between the wars, transferred to “state housing commissions” after World War II. However, even when built, the technology was old; light switch/socket at the end of the wall conduit above Albo. 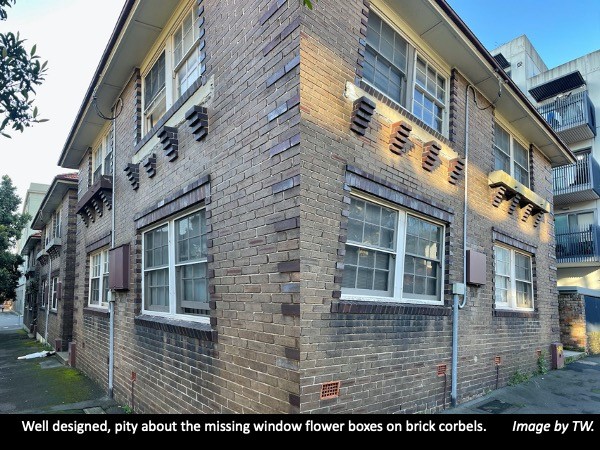 Albo’s old house is now in disrepair and disrepair: the once-beautiful cantilevered flower boxes on the second floor no longer hold flowers, many having fallen from the building. It looks ripe for the NSW government’s current approach to social housing: sell it and don’t replace it.

Like so many of his generation, Albo used his earnings (and later those of his wife Carmel Tebbutt) to purchase homes in Marrickville and Newtown. And like so many others, he also got a windfall when they sold for double their value, the very rise in property values ​​that deprives future generations of home ownership. 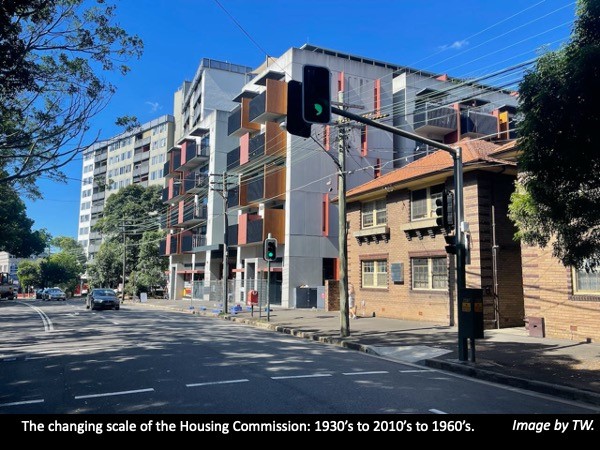 When Albo was young, houses similar to his were demolished for a sprawling 20-storey Houso block. Fifty years later, what was left of the Housing Commission (now Department), built a 6-story homeless shelter (designed by Hassell). Both are remarkable cases of all that is wrong with “public housing” because they break the “three golden rules of social housing”: it should be small, scattered across the city and suburbs, and it must be indistinguishable from the surrounding houses. . 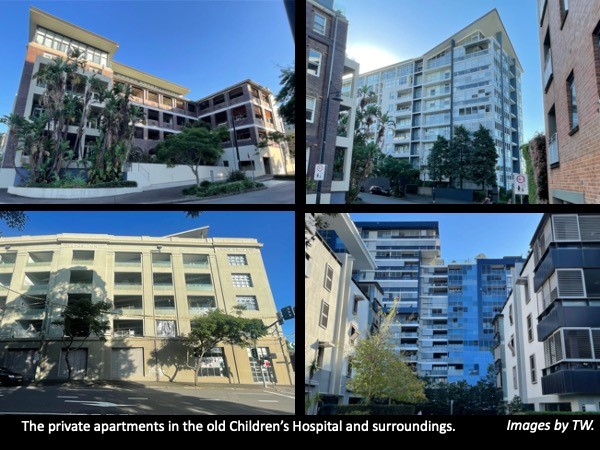 Albo spoke about the area he grew up in: the metal foundry, the Grace Depository, the Weston biscuit factory (for ‘Wagon Wheels’) and the Royal Alexandra Hospital for Children opposite his home. All have been converted into upscale apartments, most of good design quality. Unfortunately, neither the NSW Government nor Sydney City Council saw fit to require affordable ‘build-to-let’ housing in this massive redevelopment.

This is the political conundrum that awaits the Labor Party: how to go from goods for houses, and how to revitalize our social housing. It will take a whole-of-government approach: changes to tax regimes, seed projects, selective grants and loans. All social housing programs will hopefully obey the “three golden rules” to have some of what Albo once knew firsthand, replicated in our cities and regions. And to redirect our design energies away from the inflated ego statements that destroy the suburbs.

Tone Wheeler is Principal Architect at Environa Studio, Adjunct Professor at UNSW and President of the Australian Architecture Association. The opinions expressed here are solely those of the author and are not owned or endorsed by A+D, the AAA, or UNSW. Tone does not read Instagram, Facebook, Twitter or Linked In. Sanity is preserved by only reading and responding to comments addressed to [email protected]