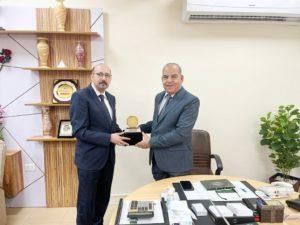 EFIC Chairman of the Board, Abdel-Azim Al-Abbasi (pictured above), said the company seeks to meet customer needs in local and overseas markets.

Abbasi explained that the company strives to continuously increase its production capacity to keep up with the development plans of the Egyptian government. The country intends to increase the volume of cultivated agricultural land in the coming years. EFIC aims to increase its participation in the national market to achieve a 70% share of phosphate fertilizers.

According to Abbasi, the company exports around 50% of its production. He said huge sums went to Bangladesh, Pakistan and Brazil last year, but EFIC has the capacity to increase exports.

Regional Director and Head of Office of the Arab-Brazilian Chamber of Commerce (ABCC) in Egypt, Michael Gamal, met with Abbasi to discuss food security and strengthening ties between Egypt and Brazil, such as the increase of fertilizer supply on the Brazilian market. Gamal was delighted with the idea of ​​cooperating with the company and facilitating the entry of its products into Brazil.

Brazil has sought to increase alternatives in fertilizer supply due to concerns posed in the global market by the war in Russia, an influential player in the sector. Brazil needs imported fertilizers to maintain and expand its agricultural production, which also exports to countries like Egypt.


Legal disclaimer: MENAFN provides the information “as is” without warranty of any kind. We assume no responsibility for the accuracy, content, images, videos, licensing, completeness, legality or reliability of any information in this article. If you have any complaints or copyright issues related to this article, please contact the provider above.